This excursion is can be done by bus with a group, a minivan with 6 persons, with your own car with 3 stops with a guide present

In 1953 disaster struck in the southwest of The Netherlands. Due to a fatal combination of storm surge and spring tide a large part of the country was flooded. The province of Zeeland was badly hit, more than 1800 people and thousands of animals died and 100,000 people ended up homeless.

In 1958 the The Ministry of Water Managementpassed the Delta Act,  officially commissioning the construction of new dams, dikes and flood barriers .

The first structure was the Waterkering Hollandsche IJssel near Rotterdam. This flood barrier can block the Hollandse IJssel and thus guarantee the safety of 1.5 million people. In all 16 constructionworks were carried out. A huge structure is the Haringvlietdam with 17 locks for draining surplus water. The Oosterscheldedam, the storm surge barrier with sliding doors that can be closed at high tide and which ultimately cost 2.5 billion euros, was officially opened on 4 October 1986 by Queen Beatrix. In order to be able to close off the Nieuwe Waterweg and not hinder shipping traffic, two floating doors have been installed at the Maesland Kering.

The risk of flooding had thus decreased considerably, 800 km of existing dykes had been reduced to 70 km of protective raised seawall.

Variation A traveling in your own car with three stops where you meet Guide Jan. Oosterscheldekering, Watersnood Museum, City of Zierikzee.

Variation B With rented Minivan 6 persons travelling from Rotterdam CS we will visit parts of Zuid-Holland and Zeeland to view the engineering works constructioned to withstand floods. You will discover the Haringvlietdam, the Oosterscheldedam, “the cathedral ” at Neeltje Jans and the Watersnood Museum where lunch is planned.

Variation C with a bus with a group 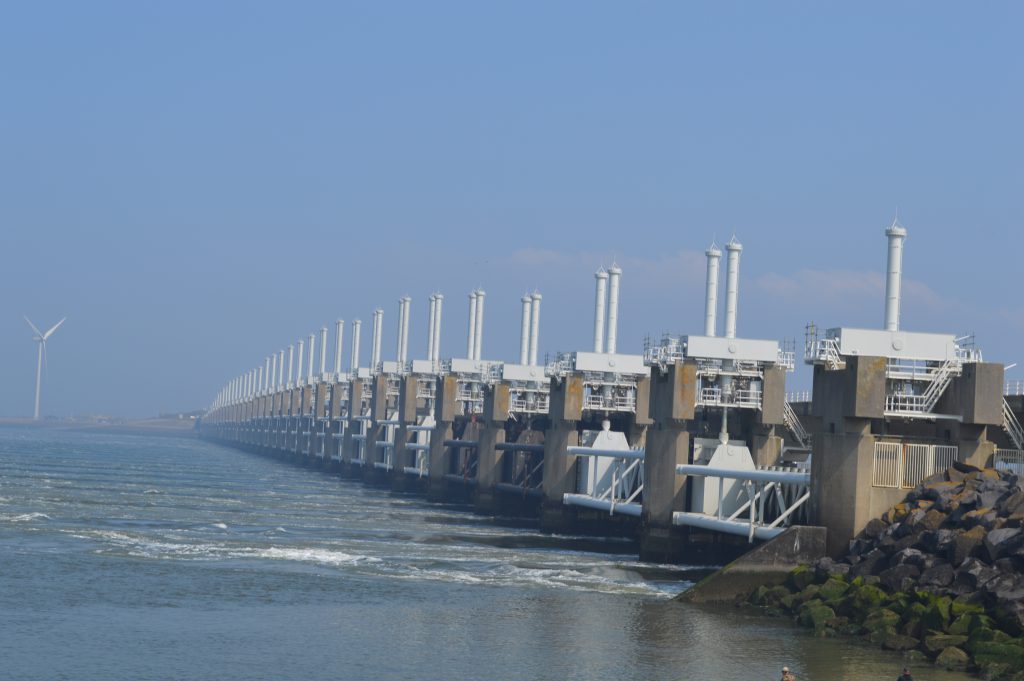