This excursion is exclusively for groups of  20 people and  more, on request.  Price on demand

In 1932 the Zuiderzee was sealed off from the North Sea by the construction of the 42 km long Afsluitdijk. In 5 years’ time, the salty Zuiderzee transformed into a freshwater lake, the IJsselmeer. Ten years later, in 1942, the Noordoostpolder was the first IJsselmeerpolder to be created.

The reclamation of the Noordoostpolder was a large-scale project. Many square kilometers of agricultural land were created. A number of villages was built, with Dronten as the major center for facilities such as a hospital and schools.

Because the Noordoostpolder is too close to the neighboring province of Friesland, the groundwater level is adversely affected in a large area. This mistake was not repeated in Oost-Flevoland and Zuid-Flevoland, where the Randmeren were incorporated in the design, for drainage and recreational purposes.

The ‘youngest’ town in The Netherlands, Almere, is located in the Zuid-Flevoland polder, not far from Amsterdam. The dam connecting Lelystad and Enkhuizen is part of the dike around the final IJsselmeer polder. However, this Markerwaard polder was never completed.

In the IJsselmeer polders, the emphasis nowadays is on recreation and housing rather than agriculture.

Starting from Volendam we will travel by coach through the 12th and most recent province of The Netherlands, Flevoland.

As a result of draning and reclamation of the Zuiderzee agricultural land has become available, and space for residential areas has been created to attract people from the Randstad.

Back in Volendam we will enjoy a typical Noord-Holland lunch and attend demonstrations of cheese and clog making. 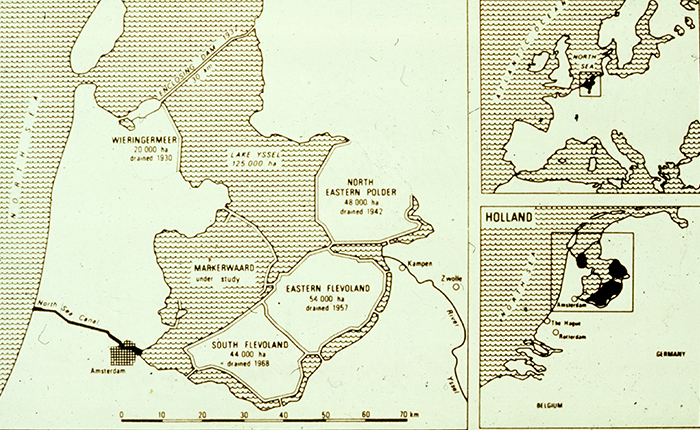