The oldest industrial area of Europa is: de Zaanse Schans.

In the 17th century in the area around the river the Zaan, hundreds of industrial mills could be found. Mill that were used to saw logs into planks, to grind minerals, to press oil from nuts and seeds or to grind spices. Tsar Peter the Great sayed in Zaandam for half a year to watch and learn to understand those funny Dutchmen and to learn about shipbuilding.

The windmill was the largest machine

Until the steam engine was invented, the windmill was the largest and strongest machine that was around. The mill, that because extinct due to the use of steam engines, became in decay. In the fifties the municipality of Zaanstad decided to move the remaining mill and put them together. Thus a village arose called the Zaanse Schans. The marked green houses are really being lived in. You can also find the very first Albert Heijn supermarket there that was made into a museum and a real clock museum.

Many different crafts are displayed at the Zaanse Schans.

Making barrels in the last coopery left, a clog museum with clog maker and a cheese makers. Everything can be viewed. Making chocolate is a new craft at the Zaanse Schans. Mini-pancakes, pancakes and fresh syrup waffles can be bought too. A real Dutch experience.

With Tourist Guide Holland you visit the mill of course, you learn about old trades and you will hear, see and smell special things.

Tourist Guide Holland can organise a tour in any town you wish, such as a walking tour, bicycle tour, boat or bus tour.

Wish to know more? Get in touch with Tourist Guide Holland to organise a walking tour or bus tour to one of the cities.

For our Terms, conditions and Fees. Please press Costs Button

Wish to know more? Get in touch with Tourist Guide Holland at Questions. 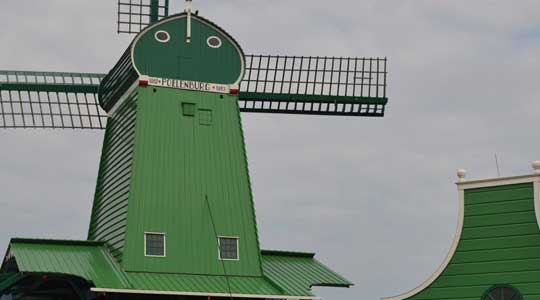 Do you want Information? Want to book a Tour or a Guide. Please contact us