De Beemster Polder with Bus or Bike with Guide Jan

A polder is shown hot that is done and maintained

From 1600 on we use Windmills as pumps to keep dry feet. We even pump out complete lakes. Then we call them polders. One of the most famous ones is the Beemsterpolder. With 100 Windmills the lake was pumped out in three year’s time. Later on a checkerboard pattern of rational streets and pieces of land was layed out. With dikes around it to keep the water out. These dikes are still in use

First Shares in a Polder to make new land

Not the pumping alone was special. Also the raising of money was special. Like business in which one could take shares it was done. In fact it was the first business in the world done like this. With the money Mills were designed and installed. In money of now a windmill costs 1 million euro. 100 windmills were needed. Afterwards everybody who put in money got a part of the dry land.  The definition of a polder is: A piece of land surrounded by a dike, in which the water level is controlled artificially and kept on the level wanted by pumping.

Leeghwater was the man who made the plans and designs of the enterprise.

The Video “Waterland” is taken in the Museum Mill at Schermerhorn. One of the 58 Mills used for the Schermer and in use until 1922. In Schermerhorn an Archimedes Screw is used for pumping water.

For Terms and Conditions and Guide Fees? Please use the Costs Button 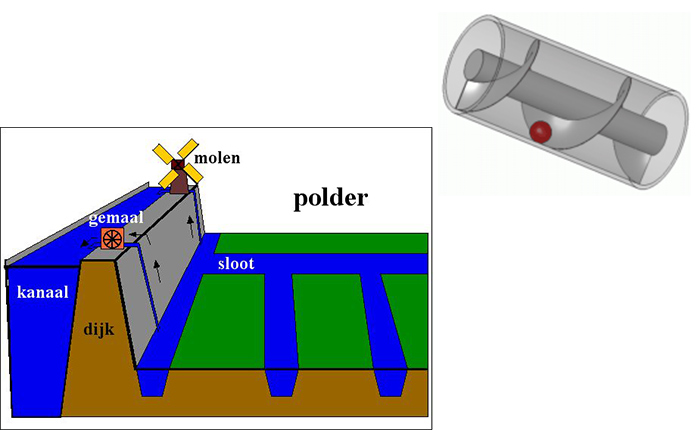 You have Questions? Want to book a Guide or a Tour? Please contact us